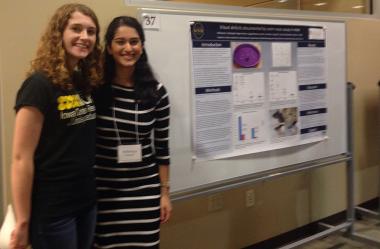 Aishwarya Kothapalli, and Megan Helms presented their poster, “Visual deficits documented by swim maze assay in mice”, at the 7th annual Fall Undergraduate Research Festival (FURF) on Wednesday, November 30th. Megan Helms is also an Iowa Center for Research by Undergraduates (ICRU) research ambassador which organizes the festival.
Abstract:
The goal of this experiment was to develop a visually guided assay to differentiate between visually impaired and normally sighted mice. These visually impaired mice are models for retinal degeneration diseases such as Bardet-Biedl Syndrome (Bbs1) and PAX 6. Such an assay is especially important, due to the lack of specificity in existing testing methods. In order to assess the visual acuity of these mice, a children's swimming pool was filled with water and the mice were dropped from a specified drop location and made to locate a randomly placed platform. This procedure was conducted in the light and dark. Three groups of mice models were used, two that were visually impaired (Bbs1 and PAX6) and one that served as sighted wild type (WT) controls. The results showed that visually impaired mice, on average, required more time to locate the platform than normally sighted mice. It can be concluded that this assay allows for a more functional approach in assessing the visual acuity of mice.